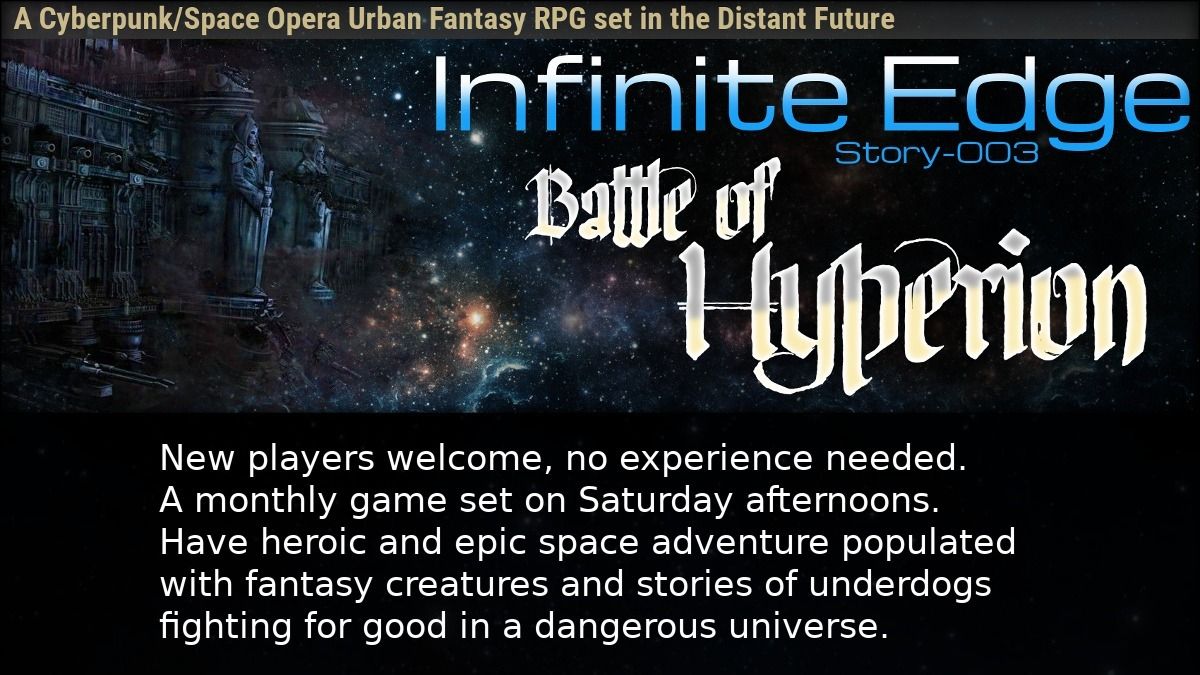 This is a tabletop roleplaying game, open to all. Set in the distant future and using the Chronicles of Darkness roleplaying game with the optional cyberpunk and space opera rulebooks, this is a game about being Big Damn Heroes in a frontier solar system being colonized by Mega corporations. The setting is full of futuristic high-tech and strange science, where creatures of legend walk the streets openly.

You play colonists, mostly unwanted individuals from the core systems. This being a cyberpunk and urban fantasy mix, you may have a character who is human, augmented, AI, psychic, or even a werewolf, mage, vampire, or something exotic like an elemental, centaur, or ogre.

This is a more story-oriented system, and play tends to be epic in scale.

The Story of Doubt

This is the background for our local setting. It ties into the main timeline.

Once upon a time, there was a family, a group of four all in perfect harmony. Sister and sister, Mother and Father, all living together in the dark woods, caring for each other and shining bright into the night.

They were in harmony when we found them. Our scientists assured us they would be stable for another billion years: a quaternary star system. Two stars orbiting each other, one large and one small, but nearly equal in mass due to the massive gas giant planet in orbit around the small. These two sister stars were wonderfully balanced, which allowed a third star to follow in a horseshoe orbit around the galactic plane, mother watching over the two. All three were orbited together by ever watching Father.

We never really got out there to examine him. We had what we needed, because we were at war. It went on the star charts as a tiny note, mostly classified during the war: EF Redoubt J-437, and we built fortifications, hauled supplies through the gate, and left it there.

If you read the histories, it was abandoned. Which is untrue: since the Redoubt was built, there has always been a relatively small population in the system. It was a spot out on the Verge, and communication was cut off during the war.

So there was no scientific record of what happened. All anybody knows is that there are now only three stars, and a thick molecular cloud often assumed to be the remains of the missing gas giant, but somehow with more mass than expected. The orbit has resolved to a more typical trinary configuration with a binary system orbited by another star.

But whatever happened, with the second Reconstruction, the MegaCorps have moved in and the population exploded due to the Exodus. Most inhabitants have been here for generations and don’t even know the history of the system. Those that do trust the modern calculations that show it is stable. The only lingering bit of history carried down is in the informal name used by inhabitants, even in Corporate reports: we all live in Doubt.